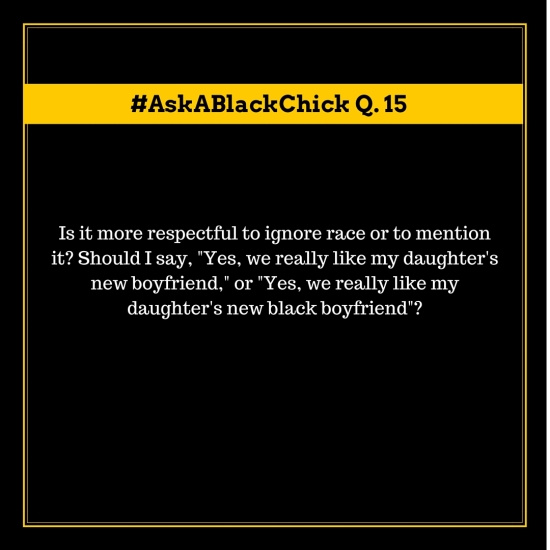 I think something like this depends on the situation.

If you are discussing your daughter’s new boyfriend, I don’t see why there would be a need to mention his race unless it came up in the conversation. When describing someone, for example, saying “I just saw a short, white male here, he was looking for you but I’m not sure of his name” or “I am looking for my friend, she is a tall black female,” is fine. It is part of the description and needed.

In that context their race has no bearing on my relationship with the individual.

But, I always wonder why some people find it absolutely necessary to the conversation to mention race if it isn’t a key component. If I am describing a co-worker, friend or family member that is how I describe them. I almost never feel the need to say “my East-Asian friend” or my “Latino-colleague.” In that context their race has no bearing on my relationship with the individual.

I do not think the act of “mentioning something” is in direct opposition to “ignoring something.”

To ignore something is to be unaware completely. People of color don’t want to be ignored. In the same way I prefer not to be colorblind, I do not want to not be unseen nor unmentioned.

People of color don’t want to be ignored.

However, if you are describing him and mention his likes, his goals, his passions, his music,etc; his race then becomes another detail of his person. I think if your intent comes with true respect while treading with caution in acknowledgement of your lack of experience/knowledge of race, all has the possibility of going well.

Long story short: it depends on intent and circumstance.

I think the whole mentioning race thing is just tricky period. When it comes to putting Black in the description you must ask yourself if I was talking about a White person would I also be specifying race. Would you say “Yes, we really like my daughter’s new White boyfriend”?

When it comes to putting Black in the description you must ask yourself if I was talking about a White person would I also be specifying race.

But at the same time the more you skirt around race, the more awkward it is. And I think many White people especially are nervous to mention race at the risk of sounding racist or ignorance. That nervousness is actually worse because then it looks like you’re trying to cancel out Blackness. And it just causes more problems. If you’re nervous to mention race, you’re then even more nervous to have an honest discussion about racial issues. And that helps no one.